Within two days Apple had to release two Updates for major iOS 8 as iOS 8.0.1 and iOS 8.0.2. First, they released iOS 8.0.1 for the iOS 8 uses for fixing bugs of their idevices. Apple has planed to fix iOS 8 issues with Healthkit, Third party Keyboard, Safari, Photo library and any more.. by this iOS 8.0.1 update. Thus thousands of iOS 8 device users have updated their devices within these two days of time. But unfortunately people who downloaded  iOS 8.0.1,  specially iPhone 6 & iPhone 6 Plus users have noticed it destroyed their Cellular service and crashed  their Touch ID. Around 50 000 of  iOS 8.0.1 users complained it happened this disaster on their idevices also.

Finally Apple has released iOS 8.0.2 update to the public. It contains bug fixes and improvements of previous versions. Now all you have to update your iOS 8 and iOS 8.0.1 running devices with this iOS 8.0.2. This is the update you must do, if your are early updated with worst iOS 8.0.1. You unable to reject this iOS 8.0.2 update cause; it needs to upgrade your device up to latest iOS 8.0.2 for fix early bugs of not only crashed iOS 8.0.1 but also major iOS 8. 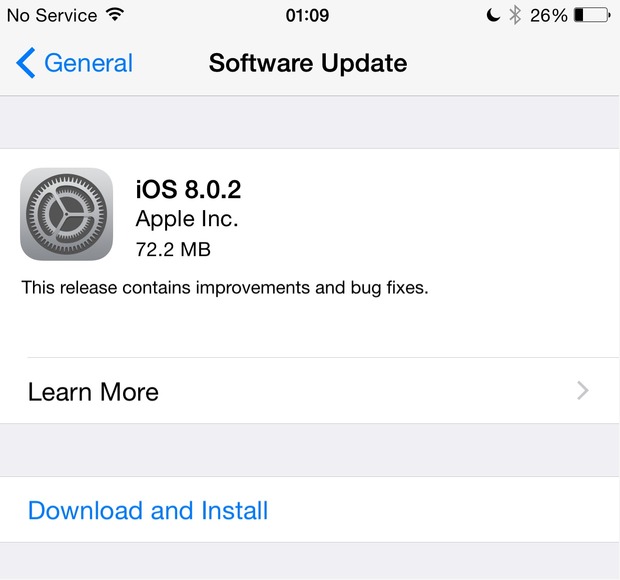 iOS 8.0.2 available now download via OTA and iTunes. It can be easily downloaded iOS 8.0.2 over-the-Air update. Go through your device’s Settings–>General–>Software Update–>Download and install