All Cydia loving users – here we like to inform you, iOS 10.0.1 jailbreak update has been demonstrated by the hacker Luca Todesco. This is the first time we have seen Cydia for iOS 10 after released it’s final for the public. 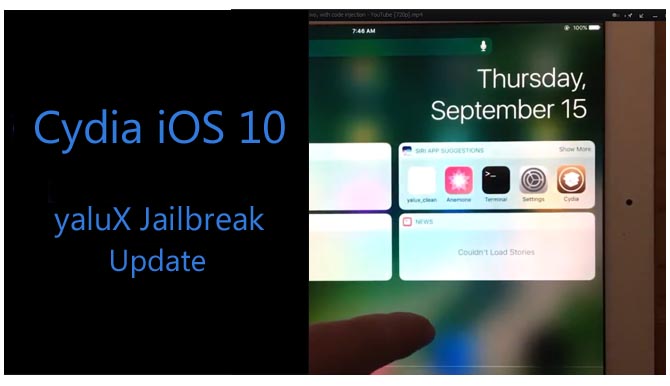 This is the updated version of his previous jailbreak of iOS 10 & now supports with iOS 10.0.1 devices. Few days ago, Luca demonstrated Cydia on iOS 10 beta8 as his first jailbreak for iOS 10 newer version

Please note, Luca is not the only person who has jailbroken new iOS 10 in jailbreak history. Pangu Team and hacker iH8Sn0w has also successfully demonstrated iOS 10 jailbreak with Cydia. However, they also did not released their jailbreak for the public users. Find more details in bellow links..

You can check out the new video below  – iOS 10 yaluX jailbreak by Luca Todesco..

Can I install Cydia for iOS 10 now?

No, you can’t. iOS 10 jailbreak not yet released for the public. It is only available in form of demonstration. Therefore, Cydia download not possible with iOS 10 as well as the iOS 9.3.5 & 9.3.4 running devices. The latest iOS version which can be jailbroken & install Cydia is iOS 9.3.3. Please remember, you can not install real Cydia without a real jailbreak tool which officially released by the developers. Pangu or TaiG not yet released any jailbreak solution  for iOS 10 / 10.0.1, 9.3.5 or 9.3.4 users.

iOS 9.3.3 or lower users -If you loves Cydia, please DO NOT UPDATE your firmware. jailbreak & Cydia still not support iOS 10 as well as iOS 9.3.4 & 9.3.5 running devices. If you are already jailbroken, recommend to install Cydia Eraser right now on your device. Then, you will be able to safely restore your device without loosing jailbreak ability if you face some error with Cydia in future.

Are you not yet install Cydia for your device? Pangu still supports to jailbreak iOS up to 9.3.3. You can find jailbreak instructions below for your Cydia installation.

iOS 9.3.4 / 9.3.5 users – Recommend to upgrade your device to latest iOS 10 firmware. you are no longer possible downgrade to iOS 9.3.3, because Apple has stopped signing iOS 9.3.3. Pangu will NOT release jailbreak for iOS 9.3.4 / 9.3.5 & they are working on new iOS 10 jailbreak. Therefore it is better to install iOS 10 for your device at this moment. Pangu will release jailbreak for iOS 10 soon in near future.