Better than Better….! This is the huge release in the year. 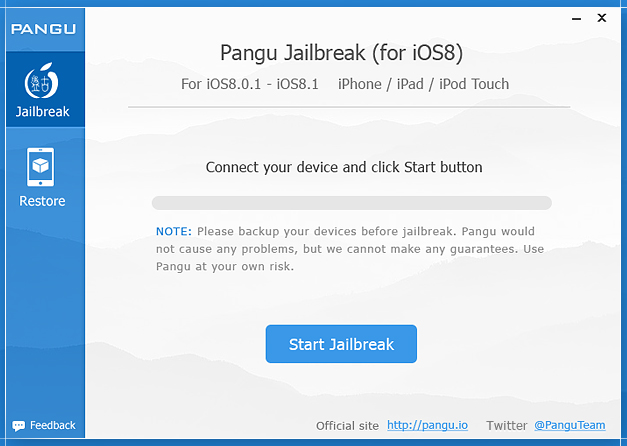 This means, Pangu8 will bring Cydia on your iOS device, at the time you jailbreak using Pangu for iOS 8. No needs to worry about difficult manual Cydia installation. Cydia author Saurik has updated Cydia Installer 1.1.14 with fixed issues on iOS 8. Now it is automatically install Cydia with Pangu8 jailbreak like its early version.

Pangu jailbreak for iOS 7.1.x versions also already included this feature. But, before now, Pangu8 1.0.1 version was not included Cydia and that is why you had to Cydia install by manually for your iOS 8 devices. You know, its how complicated. Cause that, peoples didn’t go for install Cydia, but they already have jailbroken their devices. Thank you for Pangu team & Saurik, both you are a great combination. Go ahead! for upcoming iOS versions like iOS 8.2, 8.3,…. We are fortunate cause of you

This is the updated version of Pangu jailbreak (Pangu 1.1.0) with English support. And we hope for Mac support sooner.. These are the tags with latest Pangu jailbreak.

In addition, it is now integrated Restore Function to this latest Pangu release. Now Pangu will do the restore task for you with simple one touch operation. With Pangu, you are able to restore your device to iOS 4.x – 8.x

1 Comment on “Pangu 1.1.0 update with latest Cydia for iOS 8 Released”