admin Posted on October 1, 2016 Posted in iOS 10 jailbreak No Comments 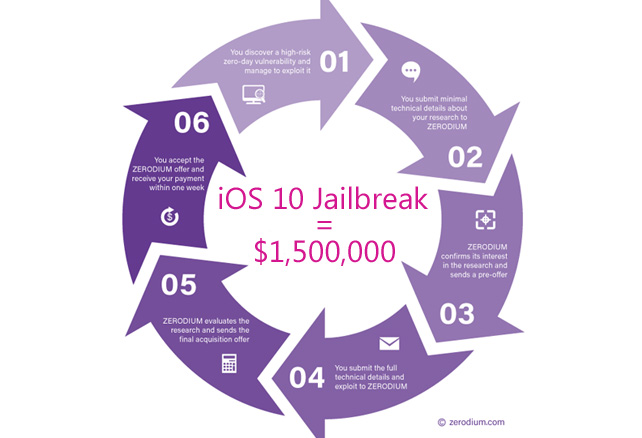 Before this, Apple had announced bounty program that offers rewards up to $200,000 for discover vulnerabilities in Apple software. Following Apple’s announcement, Zerodium raised iOS 10 jailbreak bounty rewards from $500,000 to $1,500,000. Read More >>

This is not the first time Zerodium offered financial rewards for iOS jailbreak. They previously offered $1 million bounty for the iOS 9 jailbreak. The winning team who made a remote browser-based iOS 9.1/9.2 untethered jailbreak.

Can i Cydia download for my iOS 10 running iPhone, iPad or iPad right now? No, you are still unable to get Cydia for iOS 9.3.4 & later versions. Because, iOS 10 jailbreak not yet released for the public. This mean, it is impossible to jailbreak iOS 10 version? No, we have more stories to prove Cydia for iOS 10 jailbreak is more positively possible.

This is the Luca’s first jailbreak attempt for iOS 10. He demonstrated Cydia on iOS 10 running iPad in a video.

This is the very first jailbreak demonstration released for iOS 10. The jailbreak is untethered & shows working Cydia on iOS 10 running iPhone 5

Apple’s new iPhone 7 has been jailbroken! The Italian hacker shows off Cydia on his iPhone 7 running iOS 10.0.1. This is fist time we see iPhone 7 jailbreak for Apple’s latest release.

Who will win this huge rewards? What you think? Let is us to know with a comment..