Apple has released 2nd beta build of upcoming iOS 8.4 firmware for developers as well as the public users. The first beta of iOS 8.4 was seeded just two weeks ago & it seems to be doing Apple is in hurry to launch their next software update iOS 8.4. So, there is an essential thing, everyone searches after the new firmware releases. It is Cydia. Therefore, here we like to discuss iOS 8.4 Cydia jailbreak status with this new beta release around. 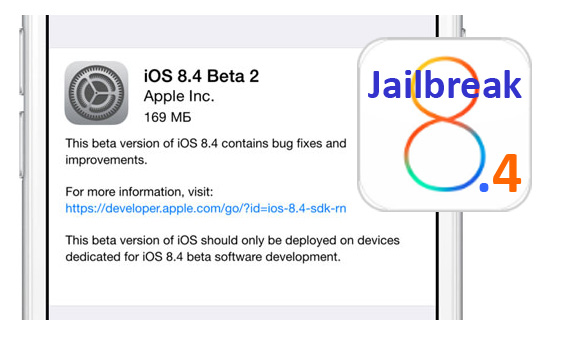 After iOS 8.1.2, we are unable to find jailbreak for the latest iOS versions to install Cydia. Therefore, there are iOS 8.1.3, iOS 8.2 & iOS 8.3 versions waiting without Cydia. (iOS 8.2 beta 1 & beta 2 was jailbroken by the TaiG & PP jailbreak). Meanwhile, Apple seeded iOS 8.4 beta 1 – the upcoming operating system for the developers. Just after the release, the Magic was arrived. The well-known hacker is called “Stefan Esser” says, he can untethered jailbreak iOS 8.4 beta 1. Yes. We could see working Cydia on iOS 8.4 iPhone device in that video demo he had published. But, like Pangu8, TaiG or PP jailbreak teams “Esser” not released any tool for the public cause we unable to jailbreak & install Cydia for our iOS 8.4 devices. That means,

iOS 8.4 beta 1 is jailbreakable but only for one person.

Beta 2 also jailbreakable? Stefan Esser is able to get Cydia for iOS 8.4 beta 2? It is not possible. Still he cannot jailbreak version beta 2 for Cydia. And also no anyone else who done this job at this moment. We are not expected Pangu or TaiG work for that. But, “Esser” has great ability to jailbreak iOS 8.4 beta 2 update. Because, he is the only man who has won against the iOS 8.4

These are the full public versions that waiting for Cydia jailbreak. For jailbreak those firmware versions, Pangu, TaiG & PP teams are working hard. Most of the peoples are hoping TaiG jailbreak update for iOS 8.2 or iOS 8.3. But, TaiG team announced – the development and release of a jailbreak tool was restricted to several factors. However, they are working to develop jailbreak for latest firmware version