Apple released first beta of new upcoming iOS 11 for iPhone, iPad & iPod Touch with lots of changes. It introduces tons of amazing features including mostly requested things by the users for a long time. To final release of iOS 11 gets few month, but you can get most interesting iOS 11 features on your iOS 10 device with Cydia right now! 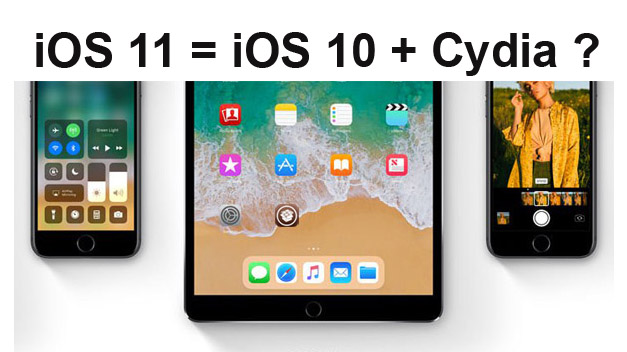 This will be a good news for iOS 10 users, the best alternative app store – Cydia is capable to load upcoming iOS 11 features to iOS 10 running devices as well. Because, most of the features of iOS 11 have been inspired by the Cydia apps & also some of the newly released Cydia tweaks have really copied iOS 11 features as well.

Here’s.. 7 best features of iOS 11 inspired by the Cydia

First you need to download & install Cydia for your iPhone or iPad. Therefore you have follow jailbreak procedure with your device. Here’s the tutorial guides.

For beginners, you can follow our Cydia Installer tool to easily find your jailbreak

After installing Cydia iOS 10, you will be able to get iOS 11 features on your iOS 10 iPhone, iPad or iPod. Just download & install bellow Cydia apps & tweaks & load upcoming features of iOS 11 on your iOS 10 device right now!

Finally, Apple has added Screen recorder to iOS 11. That can be quickly accessed by the Control Center toggle. But, this feature is already been added to iOS 10 by the Cydia tweak is call CCRecord. In addition, there are more non-jailbreak Screen Recorder apps available to download & side-load without Cydia for iOS 10.

Apple introduces new dark mode feature is call “Smart Invert” in iOS 11. But, iOS 10 users can enable this feature as much better with Eclipse 4 or Noctis Cydia tweaks.

iOS 11 includes a new file manager app is called “Files” that allows you to manage files in your device & cloud services. More powerful file managing apps available to download with Cydia for iOS 10 jailbreak users that supports all types of files with access system files.

iOS 11 comes with a less obstructive slim Volume HUD. You can get this feature on iOS 10 by the Cydia tweak is called Sonus.

iOS 11 gives the ability to move multiple app icons at once in your Home Screen. Using the MultiIconMover+ Cydia tweak iOS 10 jailbreak users also can get this feature for their device.

iOS 11 introduces one-handed keyboard feature that allows you to type with a single hand on large screen devicess like iPhone Plus series. OneHanded is best Cydia app that allows to get this feature on iOS 10 users.

What do you think? These are my favorites features of iOS 11. If I say there is nothing new in iOS11 or iOS 11 = iOS 10 + Cydia. We are pleasure to know your idea in the comment section.