Things are happening as we all are waiting for.. iOS 10 jailbreak is now out!  Luca Todesco has just released iOS 10 / 10.1.1 jailbreak for the public. 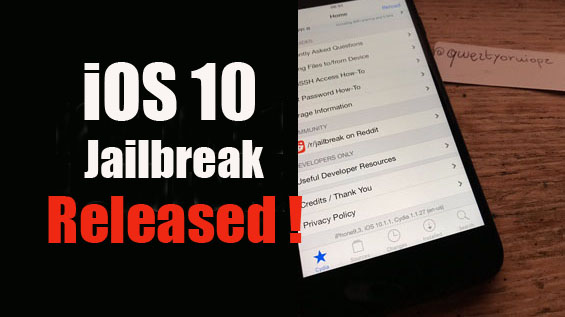 This is yalu 1, the first beta of iOS 10 / 10.1.1 jailbreak for iPhone, iPad & iPod. A moment ago, Luca announced with his Twitter that his very first public release of jailbreak for iOS 10. I know, this will be the really good news all Cydia loving users that waiting for a long time.

Now you can download Luca’s iOS 10 / 10.1.1 jailbreak for your iPhone & iPad. Please note that, still this is only a beta version & not the stable release. Luca advice users to wait for stable release & warns “Do not install unless you know what you are doing !”

The first beta only supports;

Support for more devices will be added..

Stay connect. We’ll publish a fully tutorial guide for how to jailbreak iOS 10 / 10.1.1 with iPhone & iPod.

How to install MovieBox Pro with or without Cydia