As expected, Luca Todesco released jailbreak of iOS 10 / 10.1.1 for the public. peoples are now able to download this new jailbreak to install Cydia for iOS 10 / 10.1.1 compatible devices. These are the instructions for How to jailbreak iOS 10 – 10.1.1 with Cydia Impactor 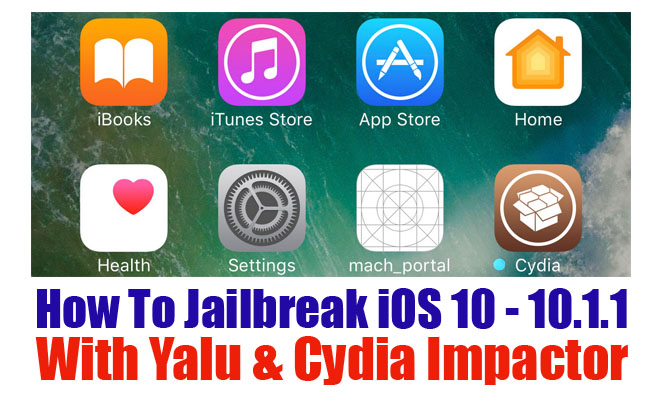 The jailbreak is just released & not stable as it still in beta. Therefore you have to continue the jailbreak process with your own risk as your device up forcing to restore. Also, there are some limitations & compatibility issues with jailbreak as not fully supported for all devices & full range of iOS 10 versions

Step 1. Important, backup your device with iTunes or iCloud

Step 2. Download latest version of yalu jailbreak ipa file & Cydia Impactor from the above official links on your computer (Windows/Mac/Linux)

Note: iPhone 7 & 7 Plus users download extra_recipe+yaluX beta4.ipa, which is more stable. If b4-1 doesn’t work, download b3 and follow jailbreak process. If you have TSMC (Chip version) iPhone 6S/6S+ or iPhone SE, then you should download appropriate modified version of Yalu jailbreak

Step 3. Connect your device to computer via a USB cable

Step 4. Extract the Cydia Impactor zip file that you have downloaded & Run on computer

Step 5.  Drag and drop the mach_portal+yalu.ipa file that downloaded onto the Cydia Impactor app

Step 6. Enter your Apple ID and password & let it to run the process

Step 7. Once the app has successfully finished, you can see a new app is called mach_portal downloaded on your device. Now you must have to trust the developer profile created under your email address.

Step 9. Go to your Home screen and launch the mach_portal app. You device’s screen will be fully white about few seconds. Finally your device will automatically reboot and then you will see Cydia on your Home screen

That’s it. You have successfully jail broken your device. Now you have a iPhone or iPad with Cydia iOS 10 installed.

Update: Luca & Saurik warns avoid to installing “YUCCA Utilities” or any other Cydia Substrate enabler with your iOS 10.1.1 jailbroken device.

Important : Please Do Not Delete the mach_portal app after the jailbreak because you should need it to re-jailbreak after each reboot.

Cydia not open? – Reboot the device & hit on mach_portal app to rejailbreak. Then open Cydia