At this moment, Apple has only released beta versions of iOS 10.2 latest firmware for the public. Surprising, a hacker already demos Cydia on iOS 10.2 (b1) successfully. This is the very first jailbreak for the iOS 10.2 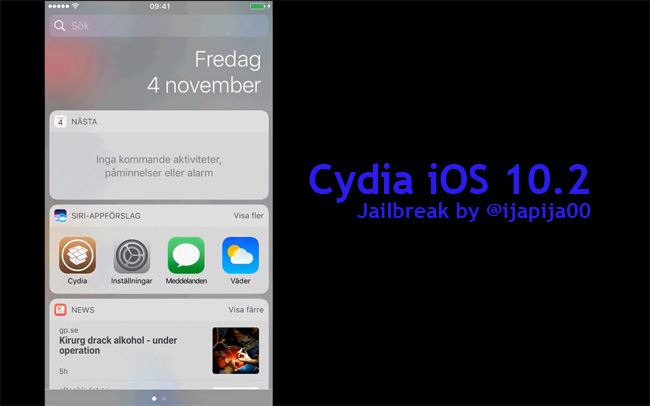 A iOS hacker called @ijapija00 has released another video to YouTube that shows off Cydia iOS 10.2 jailbreak (beta1). Few days ago, he demoed new jailbreak with Cydia iOS 10.1 and also claimed the jailbreak is compatible with the current iOS 10.1.1 as well.

This time the hacker shows working Cydia on iOS 10.2 beta 1 with his old jailbreak that has been updated to support iOS 10.2. Also, you can see code injection & file system stashing* with his new stasher in the video. This is not the untethered jailbreak for iOS 10.2 and he plans to release untether one in near future. @ijapijaoo says..

“People have asked me if this is untethered or not. Unfortunately, I have not had time to produce an untether stable enough for 10.x – 10.2, but I am on that right now. So in a few days I might post a short video with the untether working as well.”

Sadly the jailbreak won’t be released for the public. The hacker indicates several reasons for that. However, this is a great job because now we know iOS 10.2 is also jailbreakable.

“The major reasons for this not being published are:
1. Exploits require a lot of work and it is better to keep working exploit than having to find new ones.
2. As a single developer, I don’t want to be responsible for other people’s devices, if they break or lose something. I neither don’t have the time to help people having problems with the jailbreak process itself.
3. Cydia Substrate – I am using a replacement for the inject library that loads tweaks into SpringBoard (It probably needs to be re-compiled with a 10.2 SDK, Amalthea almost had the same issue excluding all deprecated methods that’s been changed in iOS 10).

What has been improved with this version of my jailbreak:
– It’s stable now and will not fail as often as before.
– It fixes all broken offsets used in 10.1 demostration making it work on 10.2.”

or scan this QR code with your device