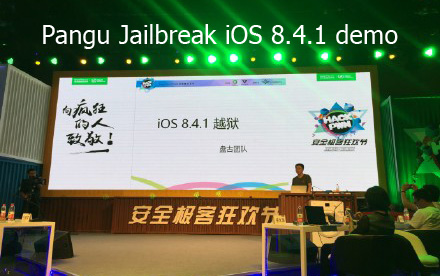 On last Friday at HackPwn2015 security conference, Pangu team has demonstrated iOS 8.4.1 jailbreak. Using a iPhone 6 which installed iOS 8.4.1, they have done this in that event.

A week before, Apple released iOS 8.4.1 and killed TaiG & PP jailbreak for iPhone, iPad & iPod. With this update, they have patched about 40 security exploits including 8 which has used by the TaiG jailbreak for iOS 8.4 – 8.1.3. So, all thought iOS 8.4.1 jailbreak is impossible. But now, Surprisingly Pangu has discovered another magical exploit.

So, it is not clear will Pangu release iOS 8.4.1 jailbreak for the public in next few days. Most probably, they will unlike to expose exploits early & keep it for jailbreak iOS 9 upcoming version. Because, Apple has scheduled to release iOS 9 after few days in September.

However, we still recommend to stay away from iOS 8.4.1 if you want Cydia. iDevice users are already have updated with iOS 8.4, you cannot go back now. Apple has stopped signing  iOS 8.4 causes downgrade iOS 8.4.1 to iOS 8.4 impossible.

Stay tuned. If there is any change in things, we’ll let you to know.

Update :
Pangu confirmed Apple has patched two vulnerabilities in iOS 9 beta 5 which are used for the iOS 8.4.1 jailbreak. This means that the Pangu jailbreak iOS 8.4.1, will not work with iOS 9. Read more details on Pangu’s blog..