↓ Skip to Main Content
Cydia Installer > Without Cydia > How to Stop Sideloaded / Hacked Apps Getting Revoked or Crashed on iPhone, iPad Without Cydia [No Jailbreak]

How to Stop Sideloaded / Hacked Apps Getting Revoked or Crashed on iPhone, iPad Without Cydia [No Jailbreak]

admin Posted on September 1, 2017 Posted in Without Cydia No Comments

Most of the iOS users download & install 3rd-party or hacked apps out side from the Apple App Store for their iPhone, iPad & iPod. However, the biggest drawback with side-loading apps often get revoked by Apple as a result of that the apps stop working. Finally, AntiRevoke released with a better solution to stop / prevent sideloaded apps getting revoked or crashed on your device without Cydia or jailbreak your device 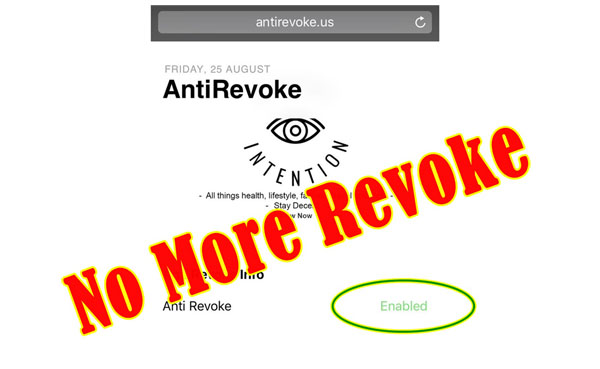 AntiRevoke is a free VPN profile which can install on your iPhone, iPad & iPod without Cydia or jailbreak. It blocks your iOS device from accessing & communicating with Apple’s server. AntiRevoke is developed by the well know developer, Joseph Shenton.

As you know, you can download & install so many Cydia apps (hacked) using third-party installers without jailbreak your device. But, most of these sideloaded applications often stop working after a while. Because, Apple continuously finds an unauthorized apps and revoke the certificate or profile of the app installer which used you to install that apps. AntiRevoke is a VPN profile that blocks iOS devices from communicating with Apple server  http://ocsp.apple.com. Then, Apple no longer can access your device and revoke your sideloaded / hacked apps.

Can I use AntiRevoke to keep my jailbreak app forever ?

Yes, you can use AntiRevoke to keep your jailbreak app like yalu102 forever with your device without reinstalling again & again. But, this only works with the jailbroken devices using No computer method. As I mention above, AntiRevoke not supports to apps which are installed with Cydia Impactor

Apple has fixed the security vulnerability that used AntiRevoke to exploit.  So, AntiRevoke may no longer work. Recommend to download Nesstool for your device that works in a similar manner.

How to download & install AntiRevoke on your iPhone, iPad [No Cydia / No jailbreak]

Step 01. Open this page with your iPhone/iPad Safari browser and go to above link

Step 03. That’s it. Now you have install AntiRevoke VPN profile on your iOS device. Check it “AntiRevoke” app that automatically install on your Home Screen. You no need to to configure anything and it should be fully working.

How to check whether AntiRevoke is enabled & fully working on your iPhone, iPad? 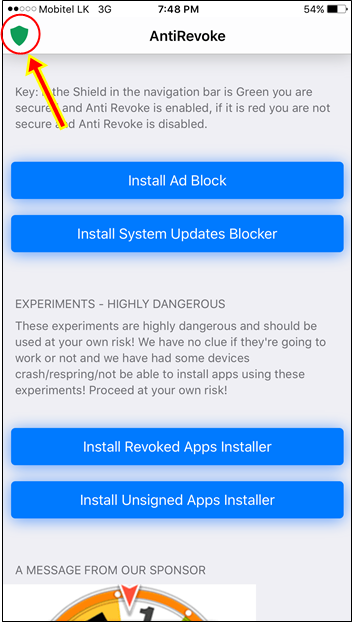 Also check it out the video below..