Apple launched iOS 8.3 version update in few hours ago for iPhone, iPad & iPod. Now it is available to download & install via OTA and iTunes. Then, the question is Cydia available for this update? Available tools are compatible & ready to jailbreak iOS 8.3 ? 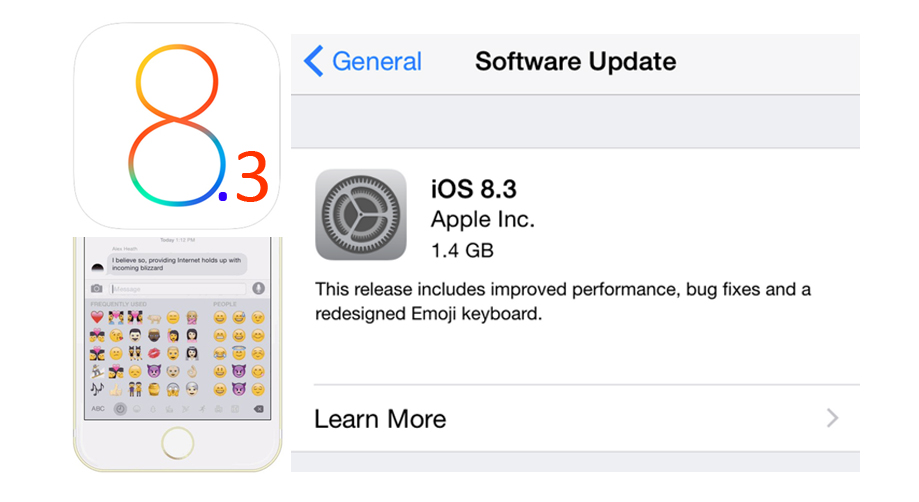 The iOS 8.3 release includes performance improvements & bug fixes. The highlighted thing with iOS 8.3 is the redesigned Emoji keyboard with 300 new emoji. The other changes according to Apple includes;

There is no any good news for Cydia lovers with this firmware release. iOS 8.3 jailbreak has become harder & harder. Apple has fixed more security bugs by the iOS 8.3. Former jailbreak developer “MuscleNerd” who contributes to make evasi0n jailbreak says, another 39 security bugs has fixed by the Apple with iOS 8.3 release.

Therefore, it is not easy to get Cydia on iOS 8.3 devices because; Apple has made iOS 8.3 as more difficult to jailbreak. But, not it means iOS 8.3 unjailbreakabe forever. TaiG or another jailbreak team will find better solution for iOS 8.3 jailbreak as well as the iOS 8.2 & iOS 8.1.3 jailbreak for your loving Cydia..

At this moment, jailbreak is not available for iOS 8.3 latest version. But, in the future you allow to Cydia download for your iOS 8.3 device using some jailbreak solution. Thus, do not upgrade your device to iOS 8.3 if you are with jailbroken device. Stay away from the latest update & keep Cydia. If you are iOS 8.1.3 or iOS 8.2 user? Recommend to upgrade your device using iTunes as iOS 8.3 jailbreak ready. Do not use OTA method, it will not support for jailbreak. Read More.. [ ]