Saurik has introduced new tool – Cydia Impactor for iOS users those who have jailbroken their devices. This allows you to unjailbreak & restore your iPhone, iPad or iPod Touch to current iOS version without updating OS. 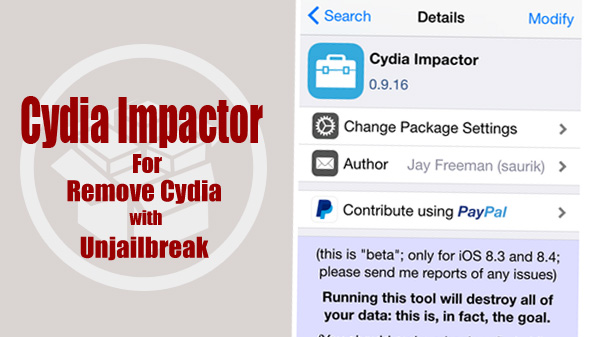 Cydia Impactor is the device management tool, it can completely remove Cydia & jailbreak with all data, apps & tweaks, sources from your jailbroken iOS device & put it to the original state. The most important thing, Cydia impactor has an ability to restore your device without updating iOS & remain the same version of iOS.

However, this new version of Cydia Impactor now has a different feature. This tool removes existing jailbreak and revert all changes made to the device and return it to “stock” firmware without any updating to a new version. So, Cydia Impactor now can be used to restore your device with remain jailbreak ability & without using of iTunes. After the tool complete task, the device will no longer be jailbroken.

Update : Currentlly, this tool is called Cydia Eraser and Cydia Impactor is now only can be used to side-load 3rd-party apps for your iOS device.

What are the benefits of Cydia Impactor?

Before this tool, you had to restore your device with iTunes to unjailbreak your iPhone, iPad or iPod due to some problem of Cydia/jailbreak or in cause of selling the device. But, restoring your device using iTunes, it update your iOS version & if the updated iOS version not supports to jailbreak, you loss jailbreak ability of your device. But, now you can simply remove Cydia with jailbreak & restore device to the original status without losing ability of jailbreak.

When you should use Cydia Impactor?

In below cases, there is no any better solutions unless Cydia Impactor.

Important things you should know & do before use Cydia impactor.

How to Un-jailbreak & remove Cydia with Cydia Impactor?

11 Comments on “Cydia Impactor – Unjailbreak your iDevice without updating iOS”