Yalu jailbreak for iOS 10.2 now support for all 64-bit devices except iPhone 7 & 7+. With the yalu102 latest beta (beta 7), iOS 10 jailbreak has been much more stable. While, new update for Cydia now available, Saurik has released Cydia installer 1.1.28 & enabled apps purchase from Cydia on iOS 10 jailbreak. 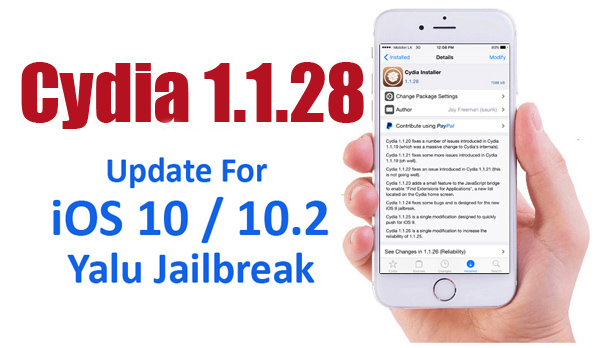 Few weeks ago, Saurik released Cydia Installer 1.1.28 beta for iOS 10.1.1 Yalu jailbreak. Now Cydia 1.1.28 final version has released as more stable & with better support for iOS 10 – 10.2 jailbreak. Also, until this users were unable to purchase any tweaks from Cydia, but now Saurik has enabled feature of app purchases with iOS 10 that allows users to get their favorites apps / tweaks for iOS 10 jailbroken devices. If you are still not jailbreak your iOS 10 device, this is the right time to do that, because iOS 10.2 jailbreak & Cydia now stable enough on iOS 10 -10.2. You can follow jailbreak & Cydia install tutorials in bellow..

We recommend all iOS 10 users to install latest version of Cydia. This is more stable & compatible for iOS 10 / 10.2 Yalu jailbreak.

That’s it. Then  it will download & installed the latest version of Cydia on your jailbroken device that better compatible with iOS 10 / 10.2 Yalu jailbreak. Keep in touch with us for more Cydia jailbreak update…