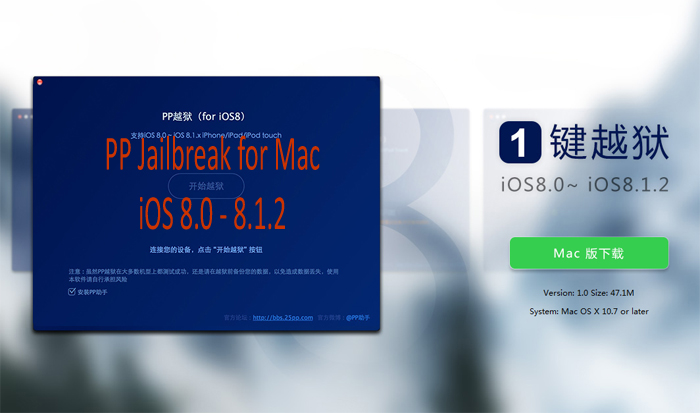 Until this, there was no any jailbreak solution for iOS 8.1.1 & iOS 8.1.2 installed devices. So, Cydia can not got those devices. The Mac only users had to wait for Mac versions or proceed difficult Windows virtual machine procedure to jailbreak iOS 8.1.2 idevices to install Cydia on their iPhone, iPad & iPod. Luckily, now Mac users don’t worry about Cydia download for their devices, cause; PP jailbreak  for iOS 8 – 8.1.2 Mac.

PP jailbreak also has released by the team of Chinese hackers. This tool supports not only for iOS 8.1.2 but also iOS 8 – iOS 8.1.x series with Cydia download & install.

How to install Cydia for iOS 8.1.2 on Mac using PP jailbreak?

The number of peoples have confirmed, the new PP jailbreak for Mac works good enough with their iOS devices. However, it;s just released & too early for judgment how it behave with iPhone, iPad & iPod models. There for we recommend use Mac version of Pangu8 jailbreak for iOS 8 – 8.1users to get Cydia for their idevices.

Windows users can jailbreak their devices up to iOS 8.1.2 using TaiG jailbreak without any doubt.