Things are happening.. This is to report you – Apple’s new iPhone 7 has been jailbroken! The Italian hacker shows off Cydia on his iPhone 7 running iOS 10.0.1. This is fist time we see iPhone 7 jailbreak for Apple’s latest release. 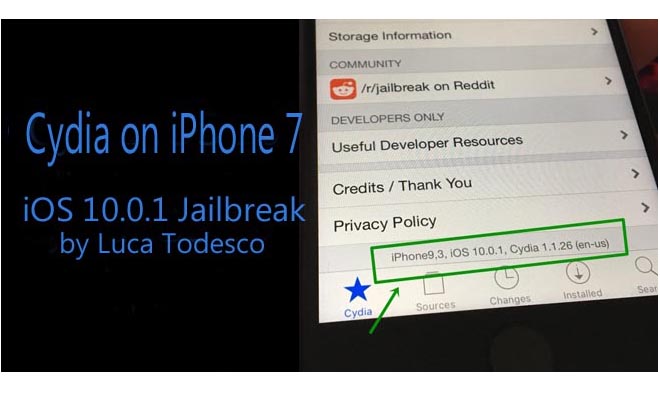 This time, Luca Todesco (qwertyoruiop) has posted a photo that shows Cydia on iPhone 7 by the iOS 10.0.1 jailbreak. In the photo you can see running Cydia (Cydia 1.1.26) on Apple’s new iPhone 7 (iPhone 7 identified as iPhone9,3) device. Todesco name his tweets, “obligatory cydia screenshot“. Take a look at his Twitter..

Lorenzo Franceschi-Bicchierai from motherboard.vice.com has now shared a video to YouTube of iPhone 7 jailbreak by Todesco.

This is not fist time, jailbreak iOS 10 done by the Luca. He recently released a video that demonstrate iOS 10.0.1 jailbreak with Cydia on iPad device with code injection.

Please note, Luca is not the only person who has been demonstrated jailbreak & Cydia for Apple’s new iOS 10 firmware. Pangu Team and hacker iH8Sn0w has also successfully demonstrated iOS 10 jailbreak with Cydia. However, they also did not released their jailbreak for the public users. Find more details in bellow links..

No, you can’t. Luca does not release his iPhone 7 jailbreak solution for the public. At this moment, it is only available in form of demonstration. Therefore, Cydia download not possible for new iPhone 7 / 7 Plus devices yet.

No. iOS 10 / 10.0.1 jailbreak not yet released for the public by the any of the above hackers. They have only demonstrated jailbreak & Cydia for iOS 10 / 10.0.1 using their new invent. Therefore, Cydia download not possible for public users with iOS 10 as well as the iOS 9.3.5 & 9.3.4 running devices. The latest iOS version which can be jailbroken & install Cydia is iOS 9.3.3. Please remember, you can not install real Cydia without a real jailbreak tool which officially released by the developers. Pangu or TaiG not yet released any jailbreak solution  for iOS 10 / 10.0.1, 9.3.5 or 9.3.4 users.