Another update available for iOS 9.0 – iOS 9.0.2 jailbreak. Pangu 1.1.0 has released with bug fixes & improvements. Now you are able to new version of Pangu download for jailbreak iOS 9 – 9.0.2 and install Cydia for iPhone, iPad & iPod. 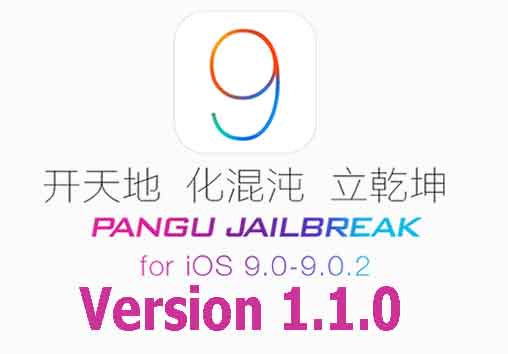 Pangu V1.1.0 includes several bug fixes & improvements for iOS 9 – iOS 9.0.2 jailbreak they already had released. This improve the jailbreak speed, success rate and the reliability of the program for 64bit devices.

This is very important update for jailbreakers. So, if you were unable to successfully jailbreak your iOS device with older versions of Pangu, (version 1.0.1 or version 1.0.0) then now can try with new version of Pangu download & jailbreak.

This is the complete step guide for how to jailbreak iPhone, iPad or iPod using Pangu,

Note: If your device is already jailbroken using the older version of Pangu 9, need to re-jailbreak it.  just install the Pangu 9.0.x Untether through Cydia.