Another happy news for iOS 8 users..! Now you are able to get jailbreak experience with all new iOS 8.2 versions with Cydia. TaiG has just released new tool for jailbreak iOS 8.2 beta versions. With this release, iOS 8.2 beta 1 & 2 can be jailbreakable on Windows platform. 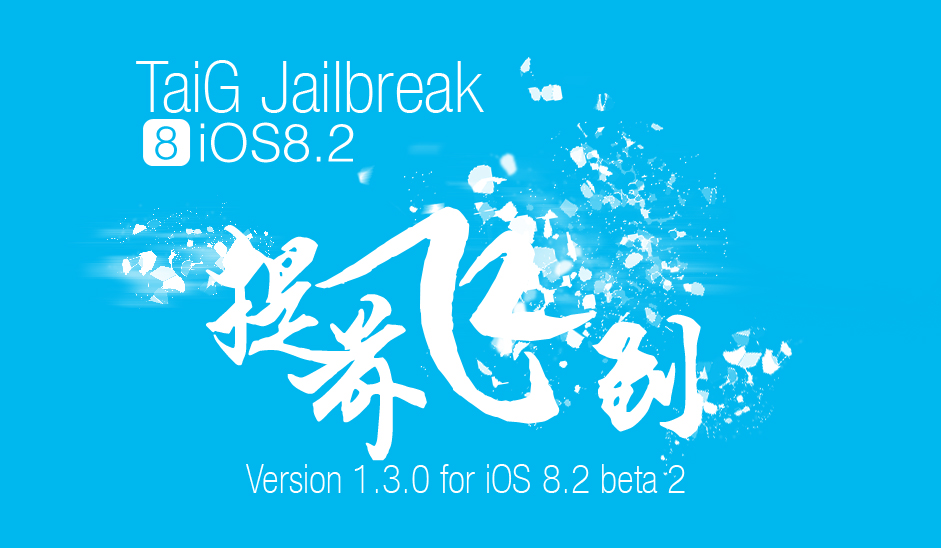 The iOS 8.2 beta jailbreak tool new released is TaiG version 1.3.0 and there is another TaiG tool also still available for jailbreak iOS 8-8.1.2 with Cydia. Recently, that tool updated as TaiG version 1.2.1 with Apple iTunes 12.1 support.

What are the compatible idevices with new TaiG jailbreak iOS 8.2?

This tool can successfully jailbreak up to iOS 8.2 second beta. Apple has released five (5) beta versions of iOS 8.2 during this moment. But, beta 3 and above versions cannot jailbreak using TaiG yet.

What are the non jailbreakable iOS versions ?

Most probably TaiG will jailbreak iOS 8.2 final. It seems they are ready for do that. Read TaiG teams’ new announcement for get some idea.

Dear Taig Jailbreak Tool users, Happy Chinese New Year! In the beginning at the Year of the Goat, we welcomes a whole new future. According to the Chinese old traditions, Taig Team prepared a special Spring Festival gift for you all.

Early this month, Apple released iOS 8.1.3, part of users have successfully upgraded to the newest system version, while temporarily there is no untethered jailbreak mothed for iOS 8.1.3. As we said before, Taig Jailbreak Team have already completed the untethered jailbreak support for iOS 8.2. Recently, Apple just released the iOS 8.2 beta 5 version, which means the official iOS 8.2 would come soon.

So we decided to announce the TaiG Jailbreak Tool for iOS 8.2 beta 1&2 on Windows.

To those who have already upgraded to iOS 8.1.3, we suggest you upgrading to iOS 8.2 beta 1&2 by using TaiG Firmware Upgrade Tool, and then use TaiG Jailbreak Tool to jailbreak your device.

Apple will launch iOS 8.2 for the public in near feature. Then, we will see the answer of TaiG for that. Stay with us for good news..