The Italian developer & iOS security specialist, Luca Todesco introduced his Yalu jailbreak solution for iOS 10 Cydia loving users. However, there were some limitations such as semi-untethered, 7-day signing, only for 64-bit devices and also not supported for iPhone 7 / 7+ (on iOS 10.2). Is there any solutions available to iOS 10 jailbreak become user friendly? This review will be very useful for iOS 10 users

As you may also know, the iOS 10 jailbreak community is talking about some new tools/things that already released and awaiting to release regarding with the Yalu iOS 10 jailbreak. So, here we discuss about the new tools called Cydia Extender,  Jbme102 & Untethere for iOS 10.x

What is Cydia Extender ? This is a recently released tool by Cydia creator Jay Freeman (Saurik). This tool was developed for auto re-sign applications on iOS that were not installed via App Store. Actually, Cydia Extender is a part of the Cydia Impactor that newly updated version (Cydia Impactor 0.9.41).

The idea behind the tool is very important for iOS 10 / 10.2  jailbreak users. As you know, the yalu102 jailbreak app installed on your device expired after the 7 days. So, you have to re-install the app on your device using a computer & re-sign to use for the jailbreak your device again. Jailbreakers not favor for this type of operation.  That’s why Saurik developed Cydia Extender to automatically re-sign apps without need of a computer after 7 days that installed via the Cydia Impactor. Then, your app stays signed forever.

So, can I use Cydia Extender as a solution for 7 day signing problem? Unfortunately No. Cydia Extender has failed to fulfill its main objective, because it required a paid Apple Developer Account to install. Currently this can not be used with a free Apple ID certificate.

Luca was announced Jbme102 – a browser-based JailbreakMe style jailbreak solution for iOS 10 -10.2. This is another solution to address 7-day sign problem of Yalu iOS 10 / 10.2 jailbreak. Also it not require a computer to install jailbreak app on your device.

However, now jbme102 will not be released, Jbme102 cancelled ! Luca says..

A developer, Lang Shi was announced an untethered iOS 10.2 jailbreak is in the work. “Btw my “untetherer” tool for iOS 10.x is almost ready, turn your semi-tethered Yalu into fully untethered with 1 tap!” he says. Also he posted another tweet that saying one of the kernel exploits he used is still available remain on the latest beta (beta7) of iOS 10.3. 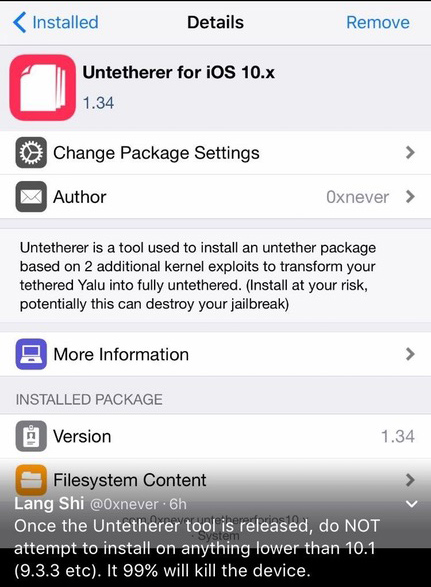