Things are going faster. The company Apple hurry to launch their next firmware update. Therefore, 1st beta of iOS 8.4 has released for the developers as 4th major update of iOS 8. 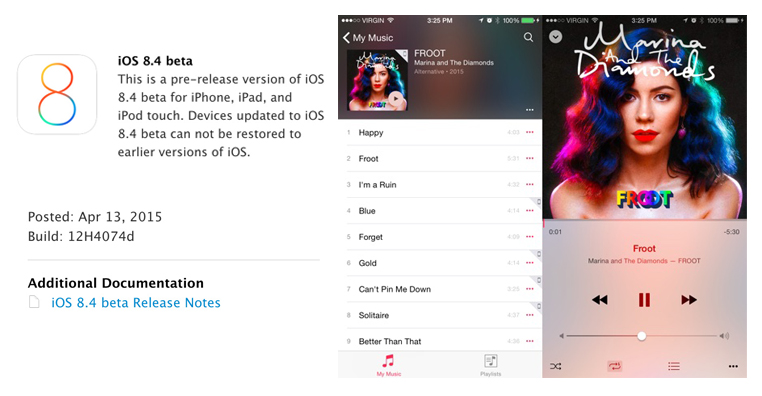 Before this, the last two beta releases (beta 3 & beta 4) of iOS 8.3 were available for public users also, through the “Apple Beta Software Program”. But, this iOS 8.4 beta is still not available in that website. Therefore, you have wanted to be a registered developer to download iOS 8.4 beta software for your device. If it is available, anyone can get pre-released software by visiting this url – https://appleseed.apple.com/sp/betaprogram/

*For download iOS beta software, you need to visit this site with your iOS device

As the major addition, Apple ready to establish their own music streaming service with iOS 8.4. Therefore, they preview all-new revamped music app by this beta release. With this new app, users will be able to enjoy music as easiest & stylish way with powerful features. So, it could be launched full service at Apples’ WWDC in June.

What are the compatible devices with iOS 8.4 ?

The all iOS 8.3 supported devices will be compatible with iOS 8.4 also. Such as;

iOS 8.4 may be the last major update for the iOS 8 firmware. After this, next Biggest version, iOS 9 will be scheduled to launch.

There is no any sign about developing jailbreak for iOS 8.4 compatible. Because there are three iOS versions (iOS 8.1.3, iOS 8.2 & iOS 8.3) are waiting for the jailbreak to get Cydia. Therefore, Cydia iOS 8.4 is far away…