Since, the jailbreak iOS 10 / 10.1.1 still in beta, is not stable & making number of issues with Cydia. With this new release, Cydia Installer 1.1.28 Saurik has addressed some of the issues such as Cydia crashing when attempting to respring after a tweak finishes installing. 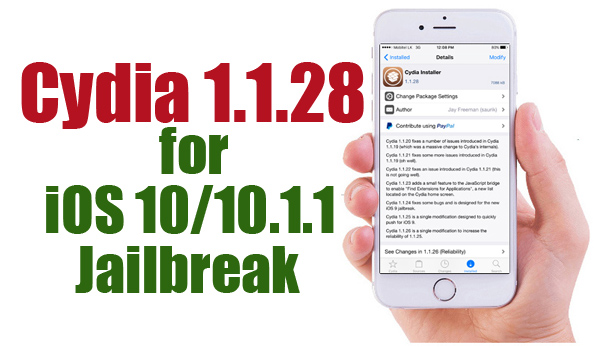 Please note, Cydia Installer 1.1.28 still in beta. The latest seed is beta5 and you also can install with your iPhone, iPad & iPod that have jailbroken on iOS 10 – 10.1.1 with Yalu. Cydia 1.1.28 will bring better compatibility for your device with iOS 10 jailbreak.

If you want to install the latest version of Cydia that more compatible with iOS 10 ? Try out Cydia Installer 1.1.28 beta with following steps. Please note, at this moment this update recommend only for the iOS 10 jailbreak users. iOS 9 users should stay with Cydia Installer 1.1.26 stable version.

Still not jailbreak your iOS 10 running device? This is How to jailbreak iOS 10 – 10.1.1 iPhone, iPad with yalu & Cydia Impactor ?

Step 02: Once the source is added, Cydia refreshes. Then it will notify three new upgrades on “Changes” tab.

That’s it. Now you have installed the latest version of Cydia on your jailbroken device that compatible with iOS 10 / 10.1.1 Yalu jailbreak. Keep in touch for more update will be available soon..