Apple released iOS 8.2 beta version for developers. We have seen some users are updated their devices into iOS 8.1.1 and they loss jailbreak important application Cydia. Pangu team these days work hard for jailbreak iOS 8.1.1. Apple iOS developers are closing most of the gates jailbreak developers used to break their restrictions. But as we know Pangu is doing their job perfectly with iOS 8.

Actually as we know, We can install Cydia for iOS 8.0 to 8.1.0 running iPhone, iPad and iPod. But this moment Pangu not support for iOS 8.1.1 and 8.1.2 running devices. But keep in hopes with Pangu team for next jailbreak release version for iOS 8.

No, This moment you cannot do it using any jailbreak tool.

Why Pangu8 does not support for iOS 8.2 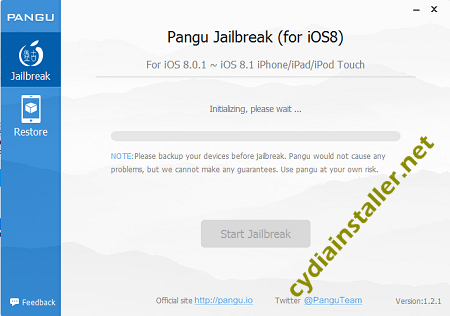 Apple device users more than 55 % of users are updated their devices to iOS 8. Also some amount of users already updated to iOS 8.1.1. They are waiting until Pangu release next jailbreak version. You can touch with us to take latest news for Cydia and related jailbreak tools.

Actually jailbreak is such hard work for developing. These teams Engineers are security experts. They are reversing Apple iOS restrictions. So you need to wait until they release solution for you. Also Cydia applications users are also need to develop their applications compatible with latest iOS.