What is iMods ? | Review of Cydia Alternative iMods App Store

6 years after, the true alternative has arrived for Cydia to iPhone, iPad & iPod devices. This is iMods, the brand new app store for Apple iOS devices. iMods is the new innervation which allows streamline iOS customization like newer before. So, when you iMods download on your iOS device, then you will be free to modify & manage it all new way.. 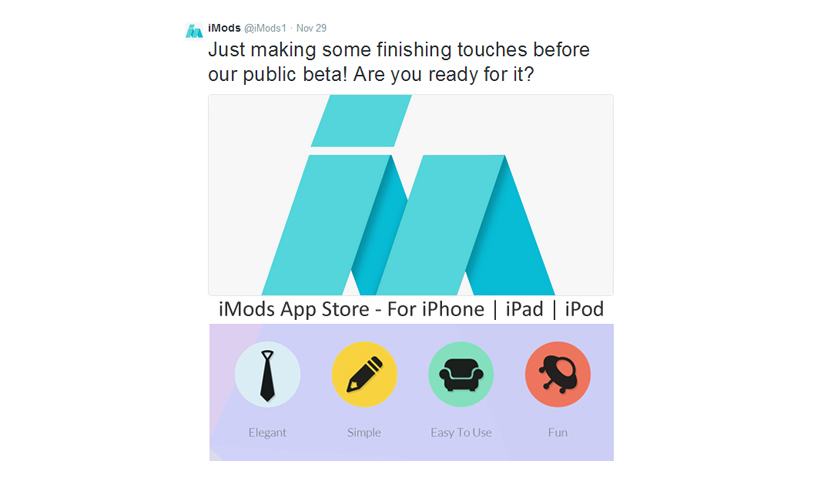 Actually, iMods is now on at the developing stage so, there is still not available for the pblic yet. However, the iMods app store developers have pulled out on-demand video of iMods beta. That video shows some fascinating information about new iMods UI and functionalists. Locks like it is fashionable and well suite with the latest firmware like iOS 8 & 9. After released iMods beta for the public, you also can touch & feel this modernized UI and how it’s behave.

The history of origin of iMods goes to the beginning of this year. During this short of little year, the team behind the iMods have worked hard for iMods new app store. As they had promised, going to take over the beta version of  iMods jailbreak store to the public.

iMods is a jailbreak app store like Cydia for iPhone, iPad & iPod Touch devices. This provides all new way to customize & modify your iOS device freely. With iMods, you can find, download, install, update, delete and manage new powerful tweaks and customize iOS devices as unique way. iMods will also install on your device with some sort of jailbreak tool, but it re-brand jailbreaking & expecting to easy to use for new iOS owners those who are wish to non jailbreak.

Who are the targeting audience of iMods ?

That is why, they trying to re-brand jailbreak.

Using a special tool (like a jailbreak tool) iMods will be install on iPhone, iPad & iPod devices. (Actually jailbreaking is re-branding in iMods). The iMods installer installs iMods wirelessly on your iDevice.

When iMods release for the public ?

The beta release of iMods will soon out for the public audience. The team of  iMods says..

“Trust us when we say that we are trying our best get this project out to users as soon as we can. We still think it is completely feasible to get the first version of iMods out before the end of the year and the public beta out well before that.”

11 Comments on “What is iMods ? | Review of Cydia Alternative iMods App Store”