Things are happening in this June something unbelievable. A Chinese Team just demonstrated a new remote jailbreak for iOS 11.4 and iOS 12 beta with Cydia. Here’s all about upcoming iOS 11.4 – iOS 12 jailbreak in-detail. 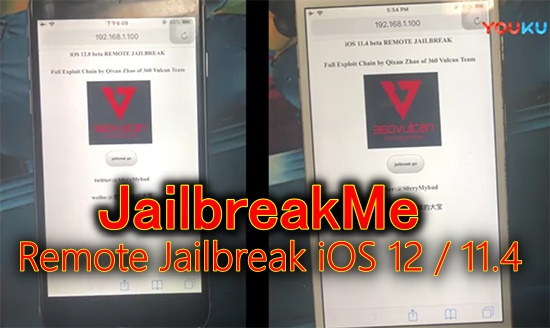 A group of Chinese security researchers is called “Qihoo 360 Vulcan Team” has successfully demonstrated new iOS 11.4 and iOS 12 jailbreak with Cydia at MOSEC 2018. Surprisingly, this is a jailbreakMe like browser-based jailbreak that was developed by Comex many year ago.

The news was tweeted by team member “SorryMybad”. He has published a video demo of a Safari based remote jailbreak for iOS 11.4 and iOS 12 beta that was presented at MOSEC 2018.

The videos that demoed iOS 12 beta and iOS 11.4 jailbreak side by side. They first launches Safari web browser and then opens the “jailbreak website”. As soon as he presses the “jailbreak go” button, the webpage injects the exploit and the springboard restarts with installed Cydia on both iOS 12 and iOS 11.4 devices. He opens Cydia on iOS 11.4 iPhone which seems working good but not on iOS 12. However, he enters commands in the Terminal to ensure that the jailbreak succeeded on iOS 12 also.

You could see more on the below video which has been published to Twitter by lead researcher of the 360 Vulcan team, “SorryMyBad”

This demo is really special because of two things, the first one is no one thing even their wildest dreams about the jailbreak of iOS 12 become early as much because Apple still has released initials beta versions of their latest operating system iOS 12. And the second one is, demoed jailbreak is a remote jailbreak means you don’t need to side load a jailbreak app (ipa file) and just you need to have a click on a button in the web site.

It is still not clear whether they plan to release iOS 11.4 – iOS 12 jailbreak for public or not. Sometimes, this jailbreak could be kept only for demonstration purposes or will submit bugs to bug bounty programs for million’s of dollars. Any how, it’s too early to talking about iOS 12 jailbreak release date because iOS 12 on developing stage yet. So, we have to wait until Apple release iOS 12 publicly to reveal more details and confirm that installing Cydia for iOS 12  actually possible for public users.

In this June is filling with mind blowing jailbreak events by the hackers and developers. So, we’ll let you know as soon as there is any update about Cydia, iOS 11 and iOS 12 upcoming jailbreak. Stay tuned with us.