This is another interesting news about Cydia jailbreak for latest iOS versions. Famous hacker in these days, Luca Todesco has published a new video demonstration of his jailbreak iOS 9.2, iOS 9.2.1 & iOS 9.3 beta with Cydia. 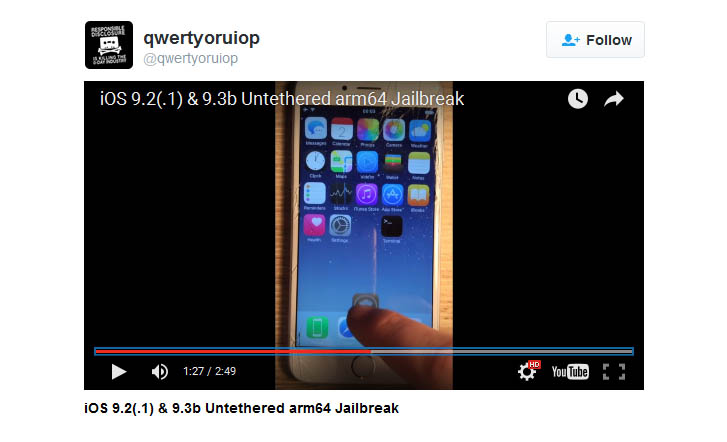 This time, he has shared a video that demonstrate the untethered iOS 9.2 jailbreak on an iPhone 6. In this video, he launches Cydia to show his iOS version, perform a command with Mobile Terminal and works with WinterBoard, Cydia theme. Take a look at the video below…

Looks like, Todesco does not plan to release his jailbreak for the public use. It will remain private as Todesco’s hint. So, you are not allow to download jailbreak for Cydia install your iOS 9.2, 9.2.1 or 9.3 devices. But, this is great attempt to raise hope that jailbreak iOS 9.2, iOS 9.2.1 & iOS 9.3 is possible. Therefore, your loving jailbreak teams – Pangu, TaiG or PP will develop & release jailbreak for latest iOS versions soon in near future. Until, wait & see to get Cydia for iOS 9.2, 9.2.1 & 9.3 devices…

What is the Cydia available latest iOS version?

Pangu released first jailbreak solution for Apple’s new iOS 9 firmware to Cydia download for iPhone, iPad & iPod in few months ago. It was only worked for iOS 9.0 – 9.0.2 devices, because Apple patched Pangu 9 jailbreak with iOS 9.1 version update. After that we are waiting long period of time without jailbreak for iOS 9.1, 9.2, 9.2.1.

Keep in touch, situation can be changed in any moment. Please follow us on Twitter, join our Facebook Fan page, add us to your circles on Google+ for further update on Cydia jailbreak.